This trip has to be up there with one of my favourite kayaking weekends! The weather was just perfect for taking on two very different but exposed paddles.

Day 1
Robbie and I drove from Belladrum up to Dunbeath on the North West coast of Scotland. We had planned a wee day paddle from there to Berriedale and back.

Dunbeath village was built during the herring boom in the 1800s and more than 100 fishing boats used to frequent it’s harbour. Although a lot quieter these days, a few boats still operate from here.

This is Robbie at the harbour before the haar cleared. You can just spot Dunbeath Castle perched on the edge of the cliffs in the distance.

Setting off, we paddled along the coast and soon came to the first feature of the day. 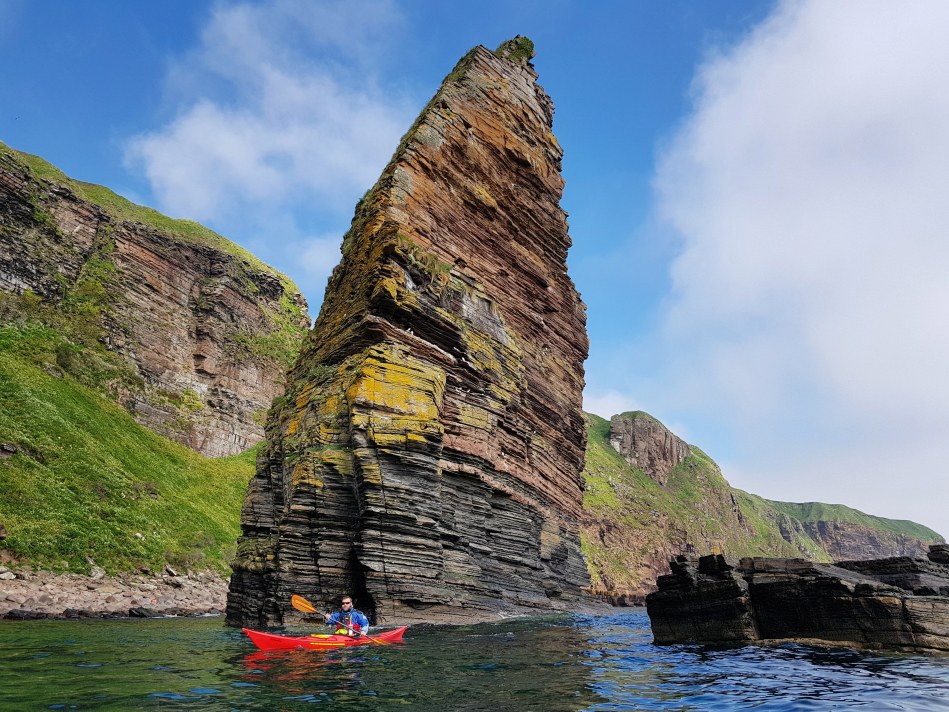 Things were just getting started as we then got to paddle through the biggest arch I’ve ever seen!

This is the impressive An Dun sea arch.

The lines of the rock formation made you feel like you were paddling downhill (or uphill depending what way you were going) – it was surreal! 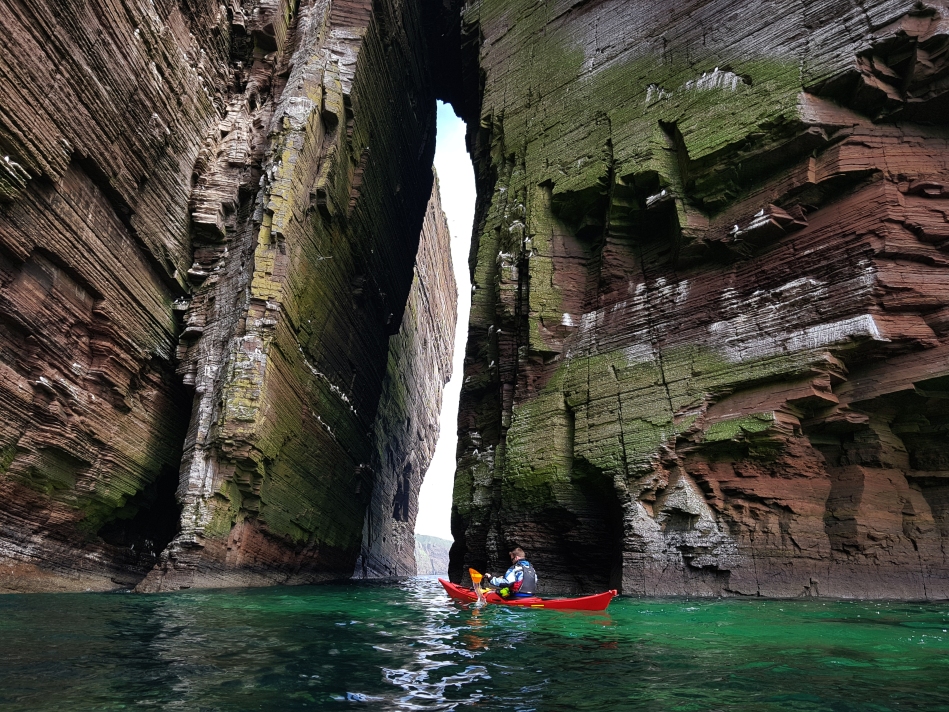 This coastline offered stunning rock architecture with a multitude of sea birds. There was a strong possibility of getting hit by the bird poo raining from above but it all added to the excitement! 😂

After landing at Berriedale for lunch we headed back again towards Dunbeath harbour.

Our next stop was Skerray Bay, situated on the very North coast of Scotland. We arrived within 2 hours of leaving Dunbeath and squeezed in a stop at the shops for some supplies en route.

Leaving everyone in their caravans behind at the campsite, we paddled the short crossing to Neave Island and set up camp for the night.

Day 2
We woke up the next morning to a hot, sunny day. This is our camping spot looking out to Eilean nan Ron (Island of the Seals), the first of the islands we were kayaking to that day.

Eilean nan Ron is accessed by paddling through a tiny arch to get to the harbour. We almost missed it!

A flight of steps (most of which were missing!) takes you up to the top.

The island was once inhabited by 73 people but the settlement has been lying empty (with the exception of sheep) since 1938. What a view they had though!

After a wander around the abandoned homes we made our way back to the harbour and got back in our kayaks.

Below the island we found plenty of amazing caves to peruse. 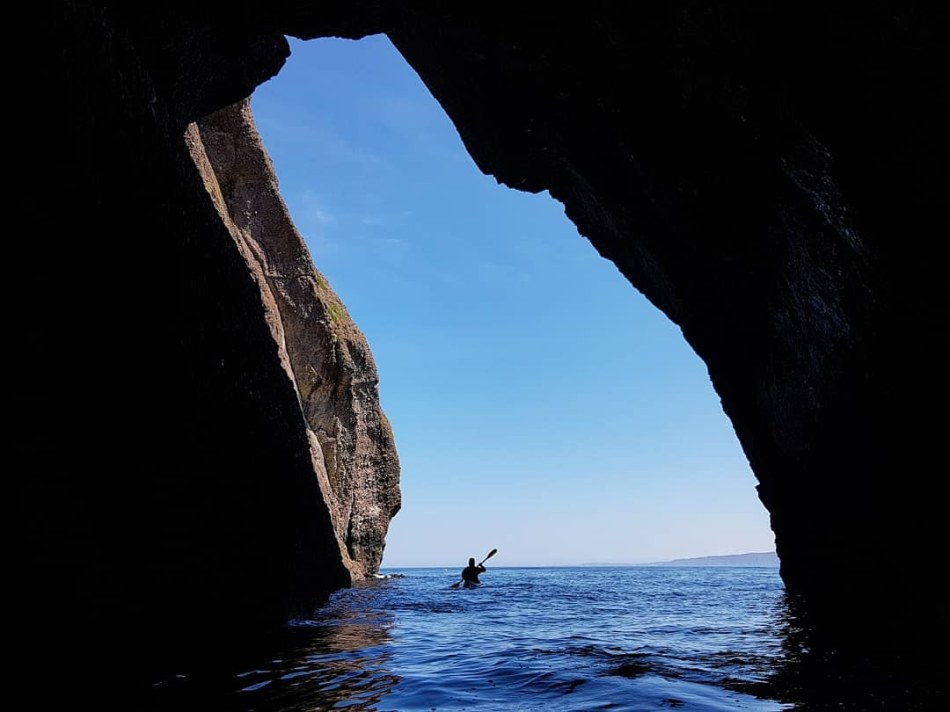 On leaving Eilean nan Ron there is a big open crossing towards the Eilean nan Gall (Island of Strangers) which are three islets situated in the mouth of Tongue bay. These days they are called the Rabbit Islands due to the sandy soil perfect for rabbit burrows!

For being such an exposed crossing it was just so calm.

We made made it to the Rabbit Islands and stopped for some lunch. 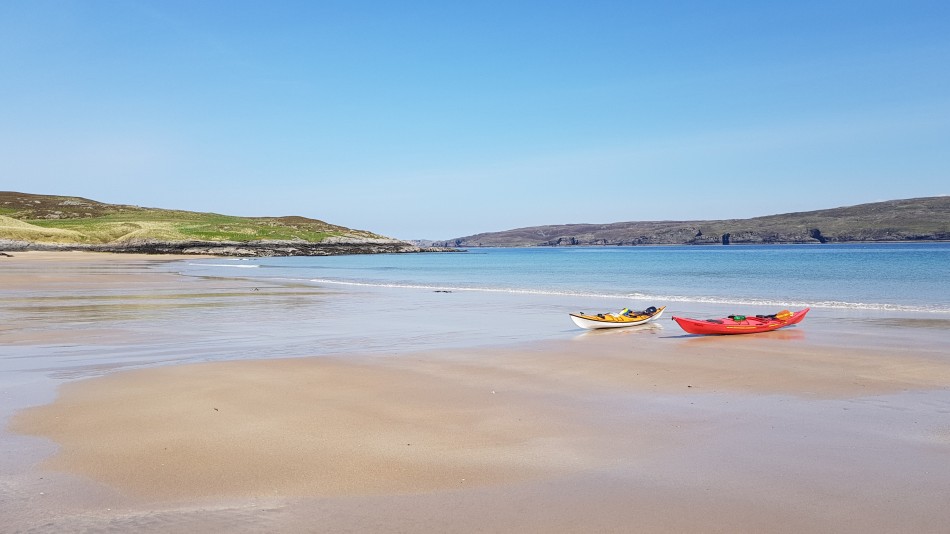 Dragging ourselves away from the beautiful beaches we set off again.

This is Robbie heading back past Eilean nan Ron to the mainland.

And through one of the many arches.

Once back at Skerray Bay we packed up and headed home. 🙁

Here’s our route on Strava from the second day.

0 comments on “May bank holiday weekend”

This site uses Akismet to reduce spam. Learn how your comment data is processed.